Blog
You are here: Home1 / Blog2 / Glimpse3 / Wisdom behind the gambling place

Avi was back in London. He’d been back in Israel for family matters for a year or so during which I’d paid him a visit, but now he’s back here, though I’m not sure why. 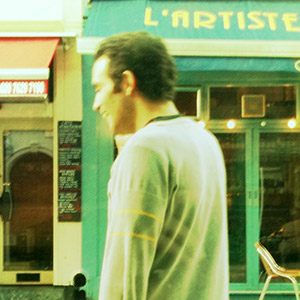 He wouldn’t admit it, but I think life must have felt sort of claustrophobic. He left home years before, away from this demanding family situation. First he went to the island of Jersey, where his father was from, then after a while he moved on to London, where I met him at the ad agency. I still don’t know how he managed to get into developing. I don’t think he actually finished or even started a study. He was just so all over the place, laughing out loud and heavily gesticulating. I really thought he was more Italian.

Avi always seemed to have something going, a business idea, his mysterious invisible Israeli friends, his talking to strangers in the cafeteria or even on the street, and finding an apartment. When I met him some three years earlier – this was before I had visited him in Israel when he was back there for his brother – he was living in Golders Green amongst the kosher delis, Hebrew bookstores, Israeli falafel joints and Japanese expats, of which he met one, Yuki, on the bus and got together with. She was quite a successful violin player, but he admitted he hadn’t the faintest idea about classical music. She didn’t care he didn’t, and the two of them found a place together, via one of Avi’s “connections” away from Golders Green up to Muswell Hill. It was just a shared place, like so many in London, above a toy shop on the main High Street. The one time I visited them there, there was some Polish guy sleeping on a couch in a room with the door open. They lived there for less than a year, until Avi went back to Israel and Yuki joined him there. Now that he was back in London after a year or so in Israel, during which Alice and I visited him there and Yuki went back to Japan, he got a place for himself just a bit north of Golders Green. He was too ashamed of the place that was so little he had to put his shoes outside whilst sleeping. London is not a place to meet someone at home but in central public places anyway. I had to get used to that idea coming from Holland where everybody meet up at someone’s home.

Often we used to meet at the Café Costa in Golders Green, even after I’d moved to South London from Hampstead in Avi’s absence. Rather I would take the 13 mile journey with the train and Tube than meet in South- or Central London. Golders Green after all, was where they had Steimatzky, the famous Israeli book store; where you could see boys walking around with payot (side curls), men sipping coffee with kippot (skullcaps) going about their business or more orthodox types involved in conversations on the street.

That one day we meet up at Costa’s and chat a tad longer than my coffee-sensitive nerves would normally allow. As usual we talk work, life, infinity and beyond. Avi is the only person in the world with whom I can tolerate talking about alternative stuff, like astrology and stuff. He is the kind of guy that lets himself be guided by “the coincidence” or tarot cards or something for a couple of weeks to see where it takes him, and the level of amazements and glorious mistakes that concludes these quests are worth more to me than many scientists’ endeavours. He is so engrossed in the mysteries of the universe that it makes you wonder how he got into computer programming. He throws himself into these things with such conviction and gets away with it that perhaps the world isn’t as rational as one would think. One way he reminds me a bit of my late father with his interest in the occult, but on the other hand Avi can easily relativize this stuff, unlike my father who perhaps stretched it all a bit too far.

Outside it is dusk now, and Avi suggests we go for a walk. Walking around Golders Green is like walking into a Chaim Potok novel, with boys dressed in black on the street on their way to the synagogue, or some other Jewish community centre. Just watching into some house above a closed shop I can see a brightly lit room with a group of men wiggling back and forth in prayer with a book in hand. Somehow there is a strange kind of excitement tangible in the air.

We walk North for about a mile or two and we approach the place where Avi lives, but he suggests we don’t go to his place but somewhere else. I’m not sure what he is up to but I trust him to surprise me. At first it seems he is somewhat lost, looking around one of the many busy traffic junctions, until he walks towards what looks like one of these betting shops, with a clover and all, a place I wouldn’t dream of entering. 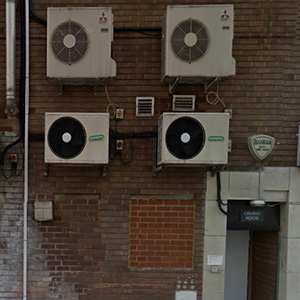 But it isn’t the betting place he is after, instead he goes to the side of it, into a dark little alleyway, on one side completely covered in outdoor air-conditioning extractor vans and some parked cars behind each other. In between some of these vans is a little door, and before I know what is going on he goes inside, up some stairs. Somewhat confused but curious and still trusting I follow him.

Upstairs is a bright little hallway leading up to various rooms, and before I know Avi is chatting with some guy in Hebrew. It’s some young guy wearing jeans, a blue shirt and a kippah. I get the impression Avi doesn’t know the guy even though he talks to everyone as if he is the best of friends in his sort of sociable kind of way. I can hear the voices of several people coming from the rooms beyond the little hallway. We walk into one of them, and in this room, which has the size of a big living room, the walls are completely covered in bookcases completely filled with big series of books, reminding me of old encyclopaedias, but most likely all religious books. In front of one side of these shelves are a couple of chairs with the middle one seated by an old bearded man, undoubtedly a rabbi, telling something with a sort of a smiley face to about half a dozen of children sitting around him. The rabbi nor the children pay immediate attention to us but Avi starts talking to the rabbi in Hebrew, and after a while apparently introduces me as I can hear him saying my name, pronounced the Hebrew way as only my mother calls me, and I can also distinguish “Holland” somewhere in between the lines. The rabbi and the children stair at me and he says something, partly in English, to which I shyly smile and give a little wave with my right hand, and they continue with their readings. Avi continues talking to the other guy again and we move around the place, as a kind of a tour. I’m not sure if Avi realizes I actually don’t know where we are and that I don’t speak Hebrew at all, but I am starting to get the feeling it doesn’t matter and I am just getting along, being guided by intentions, friendly sounds and movements rather than any rational polite words I am so much used to now in England. 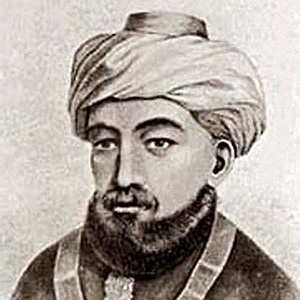 In one of the other rooms is a long table with a white sheet on it, neatly dressed with plates and candles for about twenty people or so, but no one sitting there yet. I only see about two or three more people walking around and get the impression this is some sort of community shelter, like a traveller’s base for people on a budget. On the walls in this dining room I can see some framed pictures hanging, some are like naive oil paintings; others are illustrations or photographs. One small photograph I see is of Jerusalem. In one painting I recognize Maimonides, of which I have heard and read a bit. Rabbi Moshe Ben Maimon – also known as the “Rambam” – was a philosopher and physician in Moorish Spain held high as an important person for Jewish thinking. So what exactly are the rabbi of this place here and its visitors do then? Are they at a place that require lots of thinking? All these books certainly ooze wisdom, although the portraits on the wall also reminded me of these Hindu pictures of gods with elephant trunks and multiple arms and stuff. Are they worshipping these people on the walls or are they as critical as them? I wish I knew more…

For the first time since we’re in this place Avi starts talking to me in English again, and asks me what I think of it. With so much input I don’t know what to say other than “great” or something along those lines. The truth is, I indeed feel great, a bit overwhelmed perhaps, with this surreal film-like experience. But I am also saturated with questions, and slowly start to become aware that this place is awaiting more visitors to come and eat, and that thought gives me mixed feelings. Too many people I can’t communicate with might be a bit too much, and despite Avi’s suggestion we could eat at this place I tell him I actually have to get back all the way to South London.

He accompanies me to the nearest Tube station which is about a ten minute walk, during which he manages to explain to me a bit the ideas of Chabad, which apart from the philosophical and religious associations of wisdom and stuff, is in the first place a bastion for Jews all over the world; non-judgemental, religiously observant or not; a bit like Israel he tells me, a bit like home. He says he’s been there before. I get to my hour-long Tube journey while he just heads back to the centre, which apparently is just around the corner from where he lives. 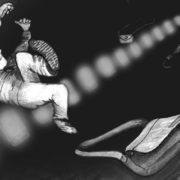 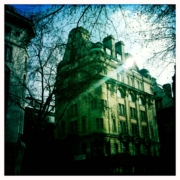