Art isn’t about what you see. What did I know…? It was somewhere in the second half of the nineties that I got accepted at the Rietveld Art Academy, one of, if not the most prestigious art school in the country, somewhat comparable in style to Goldsmith’s in London. I was accepted after displaying some of the oil paintings I had made, or the photographs thereof glued on black paper neatly presented in a folio. They were sort of surreal and melancholic, perhaps representing my mood at the time after having broken off a university career studying physics. Interested as I was in theoretic science, infinite numbers and Einstein’s theories, I didn’t see myself getting an actual career in it, wearing a white coat in a laboratory having to do earthly experiments or something.

I never knew “what to be”, “who to become” and all that with my strange mixed background. Part of that background is coloured by artists in the family and after my doubts in pursuing science reached levels of near infinity, I gave in to older yearnings in my subconscious and started trying out drawing and painting myself.

The initial pride and joy of being admitted at the Rietveld, even though it was part-time, soon got brushed over by the very nature of the school and its students. This is the place where drunken teachers, too keen on young students, applaud the junkies, prostitutes and refugees for creating the ‘tampon in a tea-cup’ work.

One time we had to make an etch, and after I tried my best to make an image of a closed eye, one teacher exclaimed “Ah, a cunt. Finally you’re getting loose”. 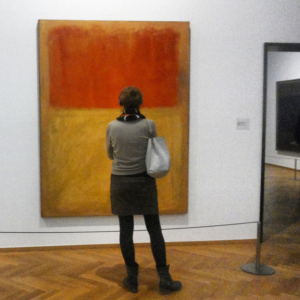 Woman watching a Rothko in the Gemeentemuseum, The Hague

One day, somewhere in the middle of the year I went to visit the Stedelijk Museum of Modern Art. With modern art you always have to look for references and associations, otherwise you just look at a bunch of strokes on a canvas. In my case, I was already familiar with the impressionists and the surrealists, somewhat resembling the paintings in and by the family. So there is always Monet, Renoir, Van Gogh of course, onto the sweet and melancholic early work of Picasso before he got all cocky, then there is the beautifully mysterious work of Giorgio de Chirico preceding the surrealist work of Dali and the humorously paradoxical work of Magritte. But I had seen most of them before and nice as they always are I was looking for something new. This sort of postmodern stuff from the found objects of Marcel Duchamp and the other ‘hero’ at the Rietveld, the installations and performances by Josef Beuys, and similar stuff after that, never did it for me. By just having and ‘idea’, and then poorly executing it – or not at all – the ‘artist’ becomes an overly cerebral, soulless and arrogant ego-tripper. Life is difficult enough to be wasted by ‘pranks’.

So as I was wandering through the rooms of the Stedelijk Museum, running almost, ticking the points of references and annoyances, dodging the other visitors by shoving them in to my black spot, I landed in a room that I hadn’t been in before. Usually when I am in a museum and enter a room I scan the place and within a second I can tell whether it will be worth it to further investigate or move along. This particular room had some abstract work, at first sight. Within the tiniest fraction of a second my eyes sort of fly over the work, concluding that there is not worth a thought here, until my eyes come to an abrupt halt at this one painting.

Even if you haven’t experienced it first-hand everybody knows the concept of love at first sight. It’s when words become suddenly pointless. Sort of like trying to explain a joke. Words – just like any other medium – deserve their own place: certain feelings, emotions can only be expressed in one way, and more often than not it remains to be seen if a connection takes place at all. You might know that feeling when you hear a song, and it is almost as if that person made it just for you, and you alone, even though he/she died before you were born. From one soul to the next. It then almost becomes annoying when you find out that other people also like that one song but for a totally different reason. At least the mind can say it must be layered, appealing to different levels of the soul.

Now this painting could easily be described as just a lick of paint on a big piece of canvas. Yet right from the beginning I’m drawn to it, nailed to the ground, my eyes not leaving the canvas for at least some 15 minutes or so. My association mechanisms are running wild until my mind shuts down and something else takes over, something more primal, something that can’t be measured. This painting is speaking to me. It is saying something to my soul directly, something about life and death, although I don’t know exactly what – not in words anyway – and it doesn’t matter. For who cares about words when a brief crack of light unveils the face of God? 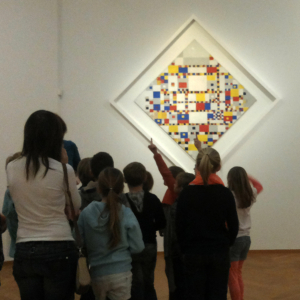 Nearly twenty years later, there is a Rothko exhibition as the Gemeentemuseum in The Hague, a short walk from my mother and the area where I grew up. The overview of his work is on the first floor, while on the ground floor there is an overview exhibition from members of De Stijl, most notably Mondrian and Gerrit Rietveld, the architect, furniture designer and name giver to the very art school that I left after one year. First I go and see the Rothko exhibition spreading over some six rooms. It is interesting to see his development, his early experiments going from figurative to abstract. Mondrian had a similar development a generation earlier and the curator is trying to show just that by juxtaposing the two in one room. It seems a strange choice to me, to have Mondrian’s final masterpiece, Victory Boogie-Woogie, a jazzy colourful representation of Manhattan and the World War II allies’ victory that seems imminent opposite a small and average Rothko. Before Mondrian went to New York, and before he started his abstract phase, he underwent a spiritual transformation which can be seen in some of his work, most notably Evolution, a triptych of a female figure undergoing something that seems like a mixture of melancholy, geometry and enlightenment, perhaps one of my most favourite paintings. After that, he had that ‘tree-transforming-into-its-essence-of-lines’ phase. Somewhere in between these transformations, Mondrian not only looks for reducing forms and colours to their essence, but also for a way of expressing basic existential and spiritual emotions that somewhat get lost in his later abstract work. 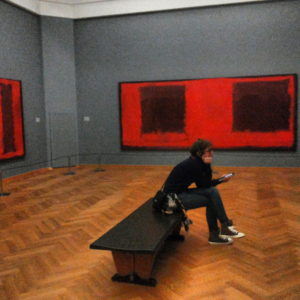 At the entrance of the room where the two are hanging next to each other it says that Rothko actually didn’t appreciate Mondrian’s work. Whether the two actually met – Mondrian died just before the end of the war in 1944 – and if Rothko had ever seen Mondrian’s earlier work I don’t know – it doesn’t matter anyway, the two are very different. Both of them have been called ‘spiritual’ in some phase in their lives, but I really don’t like that term as it has too many associations with floaty fluff – the exact opposite of the more serious approach to life and art. What struck me though was that Rothko only really ‘got loose’ after Mondrian’s death, after the war. What did he think of the Holocaust, as a Jew, who left Europe behind as a child? What did he think of the fact that none of that world existed anymore? Is it possible that somehow, when words fail, and pictures are just pictures, the souls of those that perished live on in his art?