from “The Shooting Star” by Hergé

The ground underneath the feet of the quiffed reporter and his talking dog is heating up so much that the asphalt is melting. At the same time, a mysterious star appears in the evening sky, next to the big dipper. The curious reporter decides to call the star watch.

It is Friday late afternoon. The smell of onion meatballs and gravy appears, together with the sound of talking heads on the kitchen radio. I close my door and continue reading my comic.

According to the star watching scientists the star is actually an approaching meteorite bound for the destruction of Earth. Luckily instead, all it does is causing a massive earthquake and our hero is send out for an excursion with his dog and friends.

Dinner is served. From the high chair I can just see the full content of the table. My brother had just laid it. My mother puts the mashed potatoes on my plate, creates a hole in the middle and pours some gravy in it, together with a couple of meatballs. On the table is a bowl with Brussels sprouts in it. I say I don’t want them as they smell like my brother’s farts. Despite my protest I get them anyway, accompanied by some cucumber salad and my brother’s giggles.

My mother says something, to which my brother answers in a mumbling voice. They both look so tall and grownuppish. My brother is 7 years older and he is from another planet. He talks strange, his room smells like sweaty socks and his farts smell like sprouts.

After dinner we do the dishes together. He washes and I dry. He turns the channel on the radio to something with loud music. He puts some water in his long blond hair and puts it backwards and starts singing along the song on the radio. He grabs the scrubber and holds it in front of his mouth as if it is a microphone and starts making weird uncontrollable movements with his body. I laugh and he asks me to do the same. As I do, I look at the kitchen door to the balcony. It is pitch dark outside, so you can see clearly our reflection in the glass of the door. 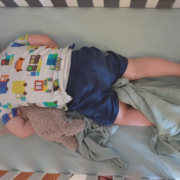