Today I walked around in my final stop, New York. My first impression, after so much I’ve seen, I wasn’t that impressed; more tall buildings with people just walking pass each other without any contact, all in their own world.

Three days earlier, in the bus from Detroit to Toronto, I met a girl from Toronto who was studying psychology there.
My original idea to have a look around Windsor vaporised when I saw what it looked like from up close: boring suburbia. On the way to Toronto we passed a place called London and even the river Thames – nothing like the original ones though; yet more suburbia.

Toronto however was very cool. I stayed in a youth hostel in the centre where I met up with some nice people. There was a French Swiss guy I talked to and I met a really nice girl from France who was studying in Germany and was considering moving to Canada. She was really cute. I also met up with 2 girls from West Berlin and a guy from New York, who I bumped into again when I visited the CN-Tower, Canada’s tallest structure.

I liked Canada, or rather Toronto, more than America: cleaner, safer, less racial problems while having a more (racially) diverse (especially Asians) society, and because the distances were in kilometres and the temperatures in Celsius and all. Also, the streets actually have names and not numbers, and don’t always seem to follow a grid pattern – it feels more European. Went to the Eaton shopping mall… unbelievable how big that is. So far, I thought San Francisco was the prettiest city I’d seen but Toronto felt the most pleasant to be in.

On my way from Toronto to New York, I was sitting next to a Mexican girl named Veronica. She looked really cute and seemed quite well off, clearly not from the region I’d visited in Juarez. Maybe, at the end of my trip I might have just met the cutest girl so far. However, she got a severe check-up at the border, at Niagara Falls, with gloves and searching at unpleasant places. Our initial nice chat was muted shortly after we’d met. She said she was also going to New York and we might catch up there later. I never saw her again.

I did meet some other people here in this surprisingly low prized nice hostel/hotel in the middle of Manhattan (they were in the middle of some renovation); there was this German guy from the Black Forest who had done his alternative military service in a hospital, there was a Malaysian guy who was studying in London and wanted to see Europe and America. There was also the one Dutch guy, who turned out to be a real dick, and some South-African guy with whom I managed to speak some ‘funny Dutch’. 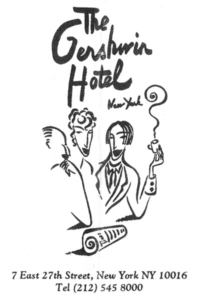 In my room, or rather a dorm with bunk beds, I managed to block the toilet with a floater. Those weird swimming pool toilets they have in North America… On the second flush the water level was rising above acceptable levels and started to flood the floor. With the help of some toilet paper I managed to somewhat repair the damage and since no one was around when it happened I just went to bed and pretended to sleep when my roommates arrived.

JFK and flying above the Atlantic, Wednesday, 8 September 1993

The next morning, I took the long metro ride to JFK Airport across the outer parts of New York, for a large part across the sky, like second floor level. Felt melancholic to leave. Walked around the air-port for a couple of hours that felt smaller than I thought it would, but it must have been because it was only a wing. Got a cassette tape of U2 and a bunch of magazines.

The flight was OK. There was a Jewish family sitting next to me whose kids (about 6 of them) liked playing with me. “Are you also from Amstelveen*?” one of them asked me. “No”, I said, “I’m from Amsterdam”.

*A suburb of Amsterdam with a large Jewish population.

Some funny or interesting place names I came across: 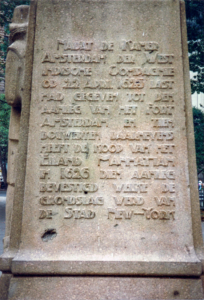 Text in Dutch at Battery Park 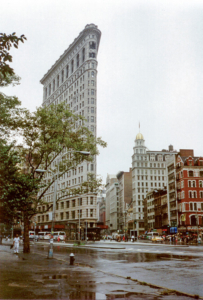 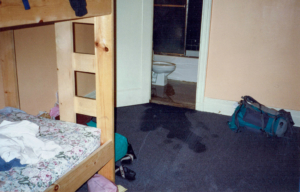 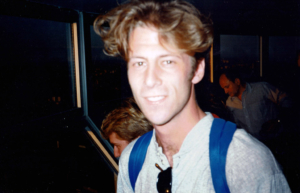 Me at the top of the CN Tower