After three days in a bus I’m looking forward to finally be in a youth hostel again. Really needed after this long journey from San Fran via the Rockies and all. After the Polish girls left somewhere mid-way I sat next to a very friendly big black guy on his way to Chicago. He was on his way back to his family and we were chatting for a long part. At some point, we ran out of conversation and at one of the stops I got out and got some yellow M&M’s and a coke, which was basically my diet most of my trip so far, apart from the odd $1 burger at MacDonald’s. When we got back in the bus and drove off I ate the sweets in one go, and my travel companion gave me a bit of a dirty look that I didn’t share any with him. I didn’t want to tell him that was basically my dinner so the rest of the journey we weren’t talking anymore.

Quite early, around 6 or so I was woken up by a guy who poked me and said something that sounded like: “Yo bro, ’ts D’troi”.

In the central Greyhound bus station, I couldn’t figure out where to leave my rucksack and asked some guy in a uniform where the baggage deposit was, but he didn’t immediately understand me until he went: “Ah, luggage!”, and pointed at the walls which where all metal-like lockers, kind of futuristically minimal.

Out on the street, an early and bright Saturday morning, was a different world. Like in Juárez I went out walking trying to keep my leaving point embedded in my memory. But unlike in Mexico there was hardly anyone on the street, especially not the further I got away from the station. I tried to stay safe, but without any living soul or even any car out on the street I felt fine. In the centre I walked across some retro-futuristic buildings, where it was hard to figure out whether they were deserted permanently or just for the weekend. Right across and through some of the buildings at some 10 metres high I saw the SF-like metro line which looked like a monorail and decided to take one. After I figured out how to get in one I realised there were not only no other passengers but also no driver! I was all alone in the thing when it took off into the sky. It slowly made its way from building to building, hovering over the streets, while a robotic voice announced the stations with names like “Cadillac Center” and “Times Square”. It was like being in a film. It’s a circular line, and when I thought I’d seen enough I got out and walked across the most modern building of the city hopefully called the Renaissance Center, with at the front a sculpture of Joe Louis’ giant fist.
No wonder such good soul and techno music comes from Detroit…

These buildings were all facing a big river with a view towards Canada, and just like I did in El Paso I decided to walk across the border. But as Detroit is especially build for cars I soon realized it was quite a walk. When I reached the nearest bridge however an officer told me I wasn’t allowed to walk across it as too many people had committed suicide by jumping from it.

As I had to take my bus across anyway I decided to walk back to the station and see from there. As I walked back to the station I realised I needed to go to the toilet, but so far hadn’t come across any public establishment. There aren’t any parks or bushes in Detroit either, so when I saw a somewhat quiet spot under a bridge I decided to do a quick squat for a number two and ran off. Luckily back at the station there was a toilet where I could finish the job.

Some of my pictures: 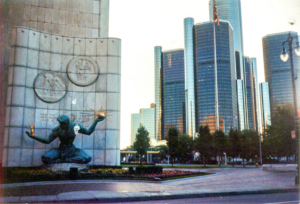 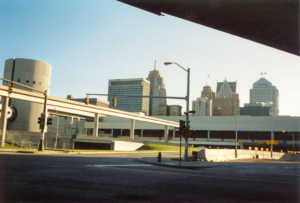 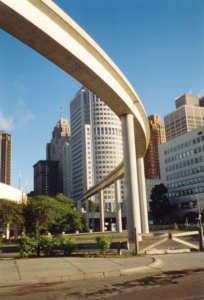 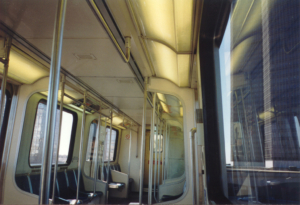 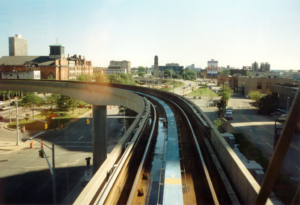 ….without even a driver…. 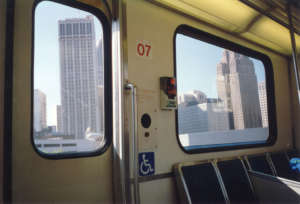 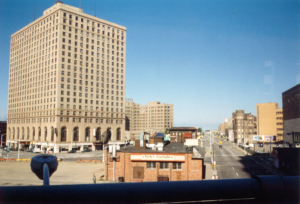 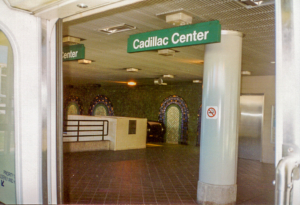 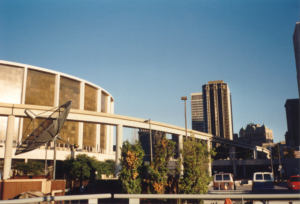 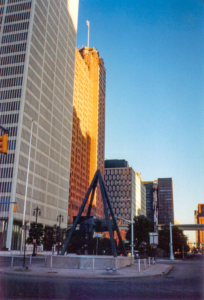 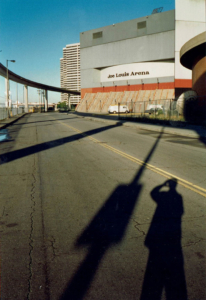 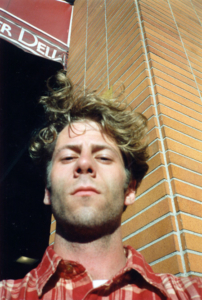 A video on the soul of Detroit (music)

Part 1: Arrival in Pikesville
Part 2: Trouble in Baltimore
Part 3: New Orleans and on to Texas
Part 4: Mexico and San Francisco