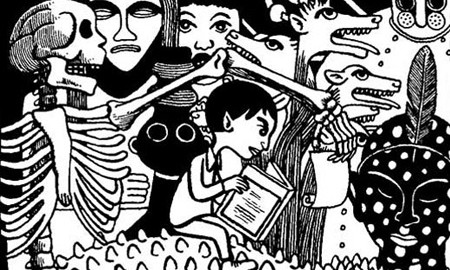 This is a top 10 of my favourite graphic novels / artists. Life as a manual

Ware’s unique autumnal isometric world view is perhaps “clinical” at first but once his language becomes familiar it gets under your skin. As no other he creates an excruciatingly painful and melancholic view of contemporary (American) society yet beautiful and full of soul at the same time. The founding father of the term “graphic novel”. The older he got, the better. Lifting the underground above the surface with big women, charming sarcasm and honest self-criticism. Amazingly turned the book of Genesis into a literal illustrated version. How to deal with the Holocaust, your father and yourself

Another founder of the genre with the defining work of “Maus”, perhaps THE best account of the Holocaust in any art form. Spiegelman proofs that illustrations don’t need to be “beautiful” as long as the message comes across, yet manages to create beautifully designed conceptual works of complicated subjects. The initial lookalike style of Tintin turns out to be just a “simple” way to tell great stories. Literature with pictures. An Iranian girl in Europe

From war-torn Iran to exile in druggy Europe seen through the eyes of a spirited little girl, drawn in a deceptively simple style. Turned into an equally succesful film. As a professional animator or simply just as a husband, but with reporter’s sensitivities, Delisle travels to unusual places like Pyongyang, Shenzhen, Burma and Jerusalem and turns these into funny and informative travelogues. Psychological insights through a bear and a cat

Neither classified as literature nor comics, and both at the same time, Toonder made this iconic series with deep psychological insight, visually inspired by the moody Irish landscape from where he was based. This fellow Haarlemmer is mostly known for his “clear line” style (think Hergé) of drawing (and in fact coined the term), but turned it upside down – literally as well as figuratively speaking. Less people know he is responsible for the first cinema/theatre designed by a comics artist. The Anne Frank of graphic novels

If the combination of artwork and written text with big themes count as a graphic novel than Salomon is the mother of the art form. Reality and art never got so closely intertwined. Urgent and heartbreakingly beautiful. A healthy mind in a healthy body (& vice versa)